by The String Arcade 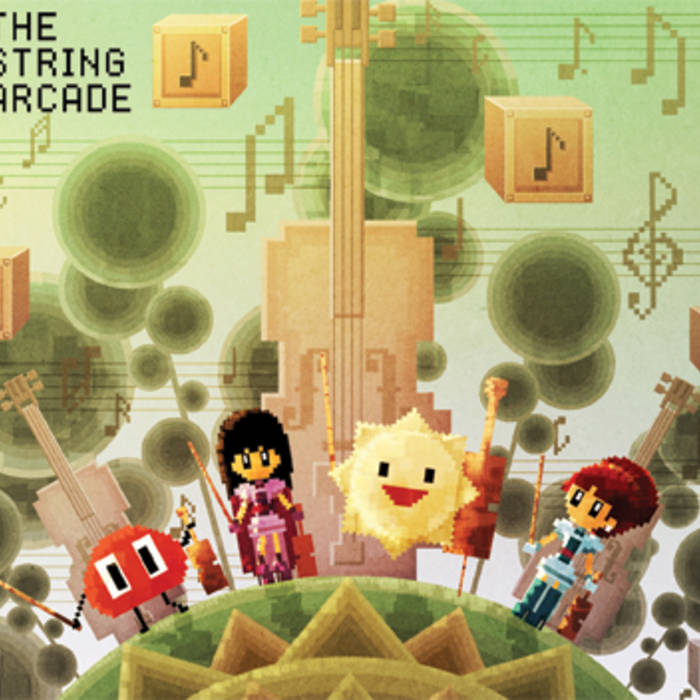 Team Oktopus Video game music played by a string quartet?!?!?!? This is the type of music that angels in heaven must be hearing all day long Favorite track: Dance of the Space Bugs - Galaga.

Grégory Bodin I do love when classical instrument meet my games. Favorite track: The Legend of Zelda Title Theme.

The String Arcade is a recording of video game music, arranged for string quartet. This isn't an arbitrary (or novelty) collection of game music, but a well curated collection of music that works together thematically as a completed recording. We also hope to inspire young musicians with this recording by making a connection between video game music and 'classical' instruments such as violin, viola and cello.

100% of the sales from this recording go to the Alameda Music Project (AMP - alamedamusicproject.org). AMP is an after school, K-5 music program, based on the El Sistema music program of Venezuela and is a tuition-free program featuring strings, chorus and percussion.

The String Arcade began as a Kickstarter campaign which was succesfully funded in Aug. 2013..

The project was produced by composer Dren McDonald. He arranged 13 of the songs (4 of them his own compositions), mixed the recordings, oversaw the KS campaign and worked with the musicians during the sessions. 4 of the songs were arranged by Jason Poss (Sonic, Tron, Ecco and Galaga). Tim Lindeen was the remote recording engineer, bringing his gear to the Montclair Presbyterian Church and Alameda Elks Lodge Ballroom to record these sessions.

DOWNLOAD version does NOT include TRON ARCADE or ALTERED BEAST which ARE included on the CD limited edition. Purchase the CD, get all of the tracks AND a download of the 15 tracks to get you started.

"Dren takes the essence of these great game songs and transforms them into the classical style. The result is a new way of looking at these songs in a different light, and in a soothing manner.”
- John Romero
(game developer, Doom, Quake, Wolfenstein 3D, Ravenwood Fair)

"They are, without a doubt, one my favorite musical groups working in the games field. "
- Ben Prunty
(composer, FTL, Gravity Ghost)

"The String Arcade's take on Scurvy Scallywags is a brilliant arrangement, and in such fine company with so many iconic games!"
-Clayton Kauzlaric
(Scurvy Scallywags, Voodoo Vince)

Produced by Dren McDonald and the Kickstarter Backers
Recorded by: Tim Lindeen
Arrangements: Dren McDonald
Except for Echos of Ecco, Tron Arcade Medley, Sonic 2 Scherzo, & Dance of the Space Bugs by Jason Poss

The String Arcade is a recording of video game music arranged for string quartet. Produced by Dren McDonald and performed by some of the bay area's finest string players!.

Bandcamp Daily  your guide to the world of Bandcamp